Afghanite for Afghanistan's Infrastructures and Extractives

Afghanite Company has accomplished two major survey projects of Turkmenistan-Afghanistan-Pakistan-India gas Pipeline. The project corridor was 816 km in length and about two kilometer in width which was to be surveyed through a fixed wing platform using LIDAR and Photogrammetry techniques. In addition to the topographical survey using the mentioned techniques; the pipeline route was investigated geotechnically based on another contract which was managed by Afghanite company. Both projects are among the largest ever contracts in their kind in the country. 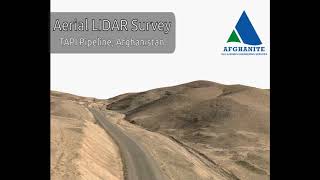 Afghanite Enters into Partnership with GTK (Geological Survey of Finland), AGS, and Kabul Polytechnic University to Improve the Exploration Capacity of Afghanistan